Qualified plans for a variety of needs

PPC offers a variety of qualified retirement plans that serve the needs of today’s businesses while addressing future financial concerns. PPC will work with you to structure a retirement program that meets your specific needs.

is a retirement plan offered by public schools and certain tax-exempt organizations. An individual’s 403(b) annuity can be obtained only under an employer’s TSA plan. Generally, these annuities are funded by elective deferrals made under salary reduction agreements and nonelective employer contributions.

is an annual test in a 401(k) plan that compares the average salary deferrals of highly compensated employees (HCEs) to that of nonhighly compensated employees (NHCEs). Each employee’s deferral percentage is the percentage of compensation that has been deferred to the 401(k) plan. The deferral percentages of the HCEs and NHCEs are then averaged to determine the ADP of each group. To pass the test, the ADP of the HCE group may not exceed the ADP for the NHCE group by 1.25 percent or the lesser of 2 percentage points and two times the NHCE ADP

Federal regulations require that all plans have fidelity/surety bonds.

Just click on one of the links below to get a quote or apply online for immediate online issuance of a fidelity bond.

Annual additions are the total of all employer contributions in a year, employee contributions (not including rollovers), and forfeitures allocated to a participant’s account.

A series of payments under a contract that are made at regular intervals and over a period of more than one year.

A type of defined benefit plan that includes some elements that are similar to a defined contribution plan because the benefit amount is computed based on a formula using contribution and earning credits, and each participant has a hypothetical account. Cash balance plans are more likely than traditional defined benefit plans to make lump sum distributions.

This type of plan, also known as a traditional pension plan, promises the participant a specified monthly benefit at retirement. Often, the benefit is based on factors such as the participant’s salary, age and the number of years he or she worked for the employer. The plan may state this promised benefit as an exact dollar amount, such as $100 per month at retirement. Or, more commonly, it may calculate a benefit through a plan formula that considers such factors as salary and service.

are amounts contributed to a plan by the employer at the employee’s election and which, except to the extent they are designated Roth contributions, are excludable from the employee’s gross income. Elective deferrals include deferrals under a 401(k), 403(b), SARSEP and SIMPLE IRA plan.

A federal law that sets standards of protection for individuals in most voluntarily established, private-sector retirement plans. ERISA requires plans to provide participants with plan information, including important facts about plan features and funding; sets minimum standards for participation, vesting, benefit accrual, and funding; provides fiduciary responsibilities for those who manage and control plan assets; requires plans to establish a claims and appeals process for participants to get benefits from their plans; gives participants the right to sue for benefits and breaches of fiduciary duty; and, if a defined benefit plan is terminated, guarantees payment of certain benefits through a federally chartered corporation, known as the Pension Benefit Guaranty Corporation (PBGC).

A type of defined contribution plan that is invested primarily in employer stock. 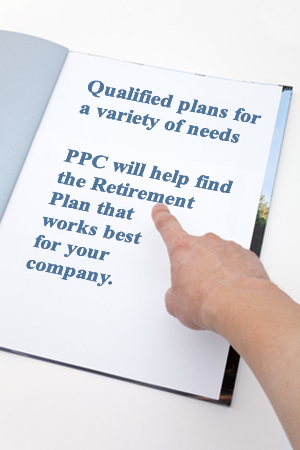 An individual account or annuity set up with a financial institution, such as a bank or a mutual fund company. Under federal law, individuals may set aside personal savings up to a certain amount, and the investments grow, tax deferred. In addition, participants can transfer money from an employer retirement plan to an IRA when leaving an employer. IRAs also can be part of an employer plan.

The part of an employee’s account balance (employer contributions) that is lost when the employee terminates employment. It is the part that was not vested.

A money purchase plan requires set annual contributions from the employer to individual accounts and is subject to certain funding and other rules.

An eligible employee who is covered by a retirement plan. See the discussions of the different types of plans for the definition of an employee eligible to participate in each type of plan.

The person who is identified in the plan document as having responsibility for running the plan. It could be the employer, a committee of employees, a company executive, or someone hired for that purpose.

A written instrument under which the plan is established and operated.

Someone who has the exclusive authority and discretion to manage and control the assets of the plan. The trustee can be subject to the direction of a named fiduciary and the named fiduciary can appoint one or more investment managers for the plan’s assets.

A 12-month period designated by a retirement plan for calculating vesting and eligibility, among other things. The plan year can be the calendar year or an alternative period, for example, July 1 to June 30.

is a defined contribution plan under which the plan may provide, or the employer may determine, annually, how much will be contributed to the plan (out of profits or otherwise). The plan contains a formula for allocating to each participant a portion of each annual contribution. A profit-sharing plan may include a 401(k) plan.

is a SEP plan set up before 1997 that permits contributions to be made through employee salary reductions. Under a SARSEP, employees and employers make contributions to traditional IRAs set up for the employees, subject to certain percentage-of-pay and dollar limits.

A plan in which a small business with 100 or fewer employees can offer retirement benefits through employee salary reductions and employer non-elective or matching contributions (similar to those found in a 401(k) plan). It can be either a SIMPLE IRA or a SIMPLE 401(k). SIMPLE IRA plans impose few administrative burdens on employers because IRAs are owned by the employees, and the bank or financial institution receiving the funds does most of the paperwork. While each has some different features, including contribution limits and the availability of loans, required employer contributions are immediately 100 percent vested in both.

An individual in business for himself or herself, and whose business is not incorporated, is self-employed. Sole proprietors and partners are self-employed. Self-employment can include part-time work.

A plan in which an employer contributes on a tax-favored basis to IRAs owned by its employees. If the employer meets certain conditions, it is not subject to the reporting and disclosure requirements of most retirement plans. Under a SEP, an IRA is set up by or for an employee to accept the employer’s contributions.

A document provided by the plan administrator that includes a plain language description of important features of the plan, for example, when employees begin to participate in the plan, how service and benefits are calculated, when benefits become vested, when payment is received and in what form, and how to file a claim for benefits. Participants must be informed of material changes either through a revised Summary Plan Description or in a separate document called a Summary of Material Modifications.

The time an individual has worked in a job covered by the plan. It is used to determine when an individual can participate and vest and how they can accrue benefits in the plan. Generally, a Year of Service requires that an employee accrues at least 1,000 hours of service over a 12-consecutive-month period.

Contact PPC to discuss which Retirement Program is right for you.